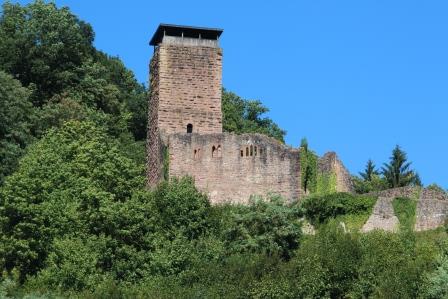 1. The Hinterburg
This castle is the ancestral stronghold of the noble families of Stein-ach. It was built by an unknown builder at the place where the mountain "Schadeck" merges into a mountain tongue. From this point the lord of the castle was able to survey and supervise the Steinachtal and the Neckar valley. It was originally a small castle, but extremely fortified. The strongest security was represented by the keep (tower), which was built at the most dangerous place, in order to be able to recognize and ward off any attack from the height at an early stage. As the last place of refuge, the keep, like most of its time, had access above the ground. He could only be reached via a ladder or rope ladder. If the castle inhabitants were safe, the ladders were pulled in. The thick tower walls with a diameter of 3 m provided extensive protection for the means of defense at that time. The inmates of the tower could wait in safety until help came from outside. A wide, deep moat sheltered beyond the castle walls. A bastion connected the castle walls with the Palas. The castle was probably built around the year 1100. As the first owner Bligger I. von Steinach is historically known, who lived until 1165. His father may have been the builder of the castle. The first name "Bligger" comes from Germanic; He was preferably used by the Steinach family, he means something like "lightning spear". An outstanding representative of the village nobility was Bligger II (1152 - 1210), who inherited the castle. He believed that the castle was monumental. He was a gifted poet and minstrel. In the wake of the Stauferkaiser he got to know the West. From him are included in the great Heidelberg song manuscript, the Manesian manuscript, in addition to a miniature and three songs. When at the end of the 12th century, the coats of arms came up, he took the "harp" as a coat of arms; It is still the coat of arms of the city of Neckarsteinach today. The Hinterburg is now a ruin and owned by the state of Hesse. The castle is accessible at any time and free of charge. 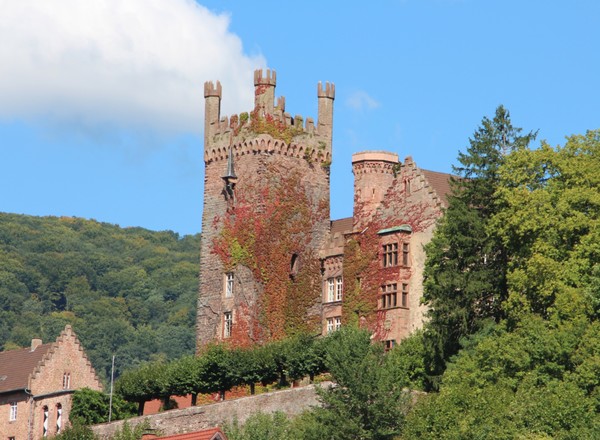 The brother of the poet, Conrad I, who as a younger son had no share in the paternal castle, built around 1165 on the same mountain tongue another castle, the "Middle Castle". This castle is built similar to the "Hinterburg". It was rebuilt into a renaissance castle in 1550 and Gothicized in the first half of the 19th century. When the castle was sold to the archbishop in Mainz and the bishop in Worms in 1325, the castle began a turbulent time. Thus, the Mainz half to 1550 18 pound holders, the Wormser share owned by 1400 - 1536 the Hirschhorner knights. From 1550 - 1653 again in the possession of land damage, it fell after their extinction to the lords of Metternich until 1754. The ecclesiastical principalities were dissolved in 1803, and the castle came first to Hesse, she with other possessions for 2000 Gul-den to the Metternich heirs Freiherr von Dorth sold. These verinherited the castle in 1920 to the Baron of Warsberg-Dorth. Since 1943 the barons of Warsberg have been the owners and residents of the Mittelburg. The courtyard of the Mittelburg can be visited. 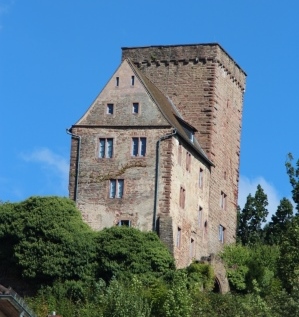 Even during the lifetime of the poet, Bligger II., An estate division took place among his sons. Again, the older son, Conrad II (1174 - 1228), got the "Hinterburg". The younger son, Ulrich I., built himself further up the neck of the ridge, on which stood the two older castles, a third castle, the "Vorderburg". It is smaller than the other two castles and is located directly above the town. The city wall was later added to the castle. It is similarly built as the other two castles. The Vorderburg is as well as the middle castle in the possession of the family of Warsberg and inhabited. Around the castle there is a park with exotic trees. The castle can not be visited. 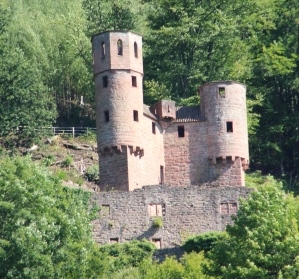 Ulrich I passed on the "Vorderburg" to his older son, Ulrich II (1236 - 1257). A son entered the spiritual state. A third son, Bligger V, had to build a castle again. However, this castle found no place on the ridge on which stood the other castles. She had to be created on the steeply sloping to the Neckar mountain massif. It is the youngest and smallest, but also the most interesting castle. Like a bird's nest, it hangs on the high mountain. Due to its location, it had to be built quite differently. Their construction must have been extremely difficult. In order to preserve the area for the castle complex and to provide it with a neck trench for protection against the mountain side, a large part of the steep rock face had to be broken out. The castle itself stands on rocky ground; she seems to be growing out of the rock. The keep replaces a high shield wall, consisting of two wing walls, the top of which is almost threateningly directed against the mountain massif, from which danger could threaten alone. To the shield wall close the ring walls, once provided with battlements and battlements. On the shield wall is a covered walkway with turrets on both sides. They provide a broad overview of the Neckar valley and the Dilsberg. In case of extreme danger, the castle inhabitants could withdraw with the help of ladders on the battlement of the shield wall. Access to the shield wall ensured a peephole, through which the attackers could be greeted with bad luck and fire.

Whoever visits the castle today, comes on a way from Neckarsteinach, which leads through the former neck trench. Previously, access was on the steep serpentine path from the Neckar up.

The ruin is now owned by the state of Hesse and was restored some time ago with great effort. This ruin can be visited at any time and for free and the shield wall can be climbed, as well as the Hinterburg, whose tower you can also climb.